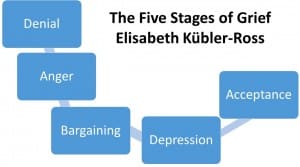 Where are you in your journey of acceptance of the COVID-19?

I had taken an early morning flight from Sydney to Melbourne and while I don’t really like orange juice I was bored. So I peeled back the silver foil and drank from the plastic cup on my tray. Later that day a radio announcer caught my attention with a public health announcement that “all travelers on flight #xxx from Sydney to Melbourne who drank any of the orange juice offered on the airplane should call a doctor immediately.”  That was three decades ago. But this COVID-19 pandemic reminds me of the feelings I felt that day. At first I was in denial. I don’t trust panic, and I don’t trust people who tell me to panic. (Now I can see it was prudence not panic.) I did not call a doctor and adopted a wait and see attitude. Then, when I couldn’t concentrate on my work I got angry. Poor me, I was minding my own business but NO…people who made mistakes (or worse) had impacted my life and now I faced the burden of going to see a doctor. It was the next stage, bargaining, when I finally did call a doctor. The second the doctor insisted on coming straight to my apartment to give me a shot, I moved on to depression. All this time I was treating this danger as if it were a made up tragedy. But dammit, it was real. To this date I don’t know what was in that orange juice. I do know that even with the doctor’s injection I spent two days in a special hell of barfing and diarrhea. The emotions I felt in that one day are very similar to my journey of acceptance regarding COVID-19.  I share this story, because I think my experience may have led me to acceptance just a bit faster.  Every minute, every hour, we spend in denial, anger, bargaining, or depression puts people we love at risk.  If you are still stuck in one of these stages…I highly recommend acceptance. Stay home. Stop bargaining to give yourself permission to attend one more gathering.  It took me six hours to call a doctor.  If I’d reached acceptance earlier, I might have saved myself some pain. I think the same goes for COVID-19. 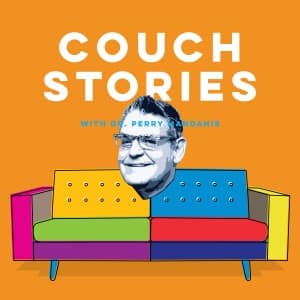 I’d love to hear what you think about this podcast. I share a story of an early experience of sexual harassment and the ways I’ve rewritten and replaced shame stories that left me frozen so I learned how to stay present and protected when it happened again. Today I genuinely feel like I can call out bad behavior without getting triggered so badly I fold like a cheap tent (or flip out). My friend Dr. Perry Mandanis is a psychiatrist, consultant, musician, artist, and brilliant therapist who shares true stories on his podcast that speak to the universal aspects of living a resilient life. You are going to love him as much as I do. He has SO many great stories to tell. 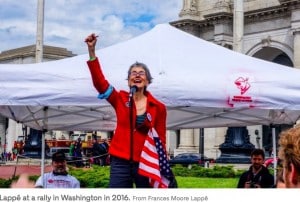 “I think it’s because the dominant story in our culture is one that creates a feeling of powerlessness, and it starts with this reductive understanding of human nature.”  Francis Moore Lappe

This is from the woman who wrote “Diet for a Small Planet” back in 1971.  That book started a conversation that is now a vital movement to reduce overconsumption of meat and increase plant-based consumption.

Her latest book Daring Democracy: Igniting Power Meaning and Connection for the America We Want correlates strongly with my own research into the narratives men and women recruit when deciding how to allocate resources and how to design power structures. Here is a quote from my proposal:

I’ve been gathering true stories men and women tell about their personal experiences with power.  And there is a theme.  Masculine narratives tend to define power as morally neutral.  Women preface their stories with clear distinctions of good power versus bad power. Francis Moore Lappe’s new book basically says the same thing without pointing fingers at gender differences. Here is another quote from her in the NYTimes article:

“We took Charles Darwin, who in “Descent of Man” says that in primal tribal societies everything was judged good or bad solely as it affected the welfare of the tribe, and reduced him to survival of the fiercest.”

Personally I think it is important to highlight that women are much more likely to live according to narratives that address the moral nature of power.  Mainly because I want to undermine the way women’s narratives are routinely discredited (attacked) as too emotional, unfocused, weak or my personal pet peeve as “utopian” by those who can only see through the lens of toxic male narratives. I think we need to do more to validate women’s narratives in order to strengthen and amplify women’s voices.

So … I think gender matters when we talk about these competing narratives.  What do you think?

Sometimes I hear a story that I just have to share.  This one came from my mother, Harriet. In this picture taken last week, you see Mom standing with the guys who just repaved her driveway. She saved for two years to repave that driveway and just had to have a picture to celebrate.  I particularly like the guys’ “Kick Some Asphalt!” sweat shirts.  For people who can’t find stories to tell, I recommend my mom’s example of turning ordinary life into story worthy events. 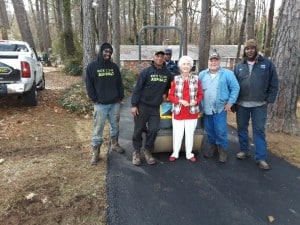 Mom loves her new driveway and the guys who made it happen!

So here’s the story:  Last Sunday Mom went to church at First Presbyterian and then to lunch with a friend. Driving back she decided to visit my “Aunt” Jere a longtime friend who taught me piano lessons and who is now suffering from COPD. On the way to Aunt Jere’s house she passed a woman walking along the road lugging five bags of groceries. Mom told me she just had to turn around.  When she pulled up, rolled down her window and asked, “Do you need a ride home?” Without hesitation the woman blurted out “YES!” They both got tickled about her enthusiastic response and once she had placed her grocery bags in the back seat and climbed in the passenger seat, started chatting.  The woman looked at mom and said, “Looks like you went to church this morning and got the message!” With equal enthusiasm Mom replied, “I sure did!” It turns out this woman had just missed her bus and if mom hadn’t given her a ride would have had to walk well over a mile with five heavy bags in the Louisiana humidity. As they pulled in her driveway, she summarized her thoughts to my mom, “Yep, the Lord’s just showing off today!”

I think value-in-action stories are much easier to find when we remember to show off our values more often.  Happy Holidays and may you find yourself with plenty of opportunties to show off the rich mutual rewards of kindness. 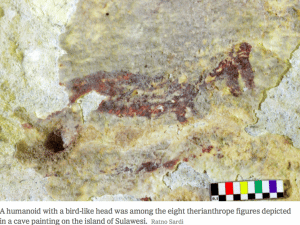 Do your stories have a spiritual message?

Or…perhaps we should ask ourselves what spiritual message do our stories tell?  Because all storytelling delivers a spiritual message.  The message may be spiritually rich or poor but it is there.  And it seems like spirituality has been at the core of storytelling from the beginning.  A recent article about newly discovered cave paintings in central Indonesia illustrates what is still a common trope – interpreting humanity through the lens of animal characteristics – from Aesop’s stories about the lion and the mouse to the three little pigs, animals have been recruited represent our values. Stories with animals tend to explore spiritual themes (compassion, courage, conservation) that illustrate the way we struggle to balance our lower and higher natures. Here is a quote from a Dec. 11, 2019 article:

Despite these unresolved mysteries, it is now abundantly clear that these humans were storytellers whose abstract paintings shed light into the origins of human cognition and spirituality.

Over forty thousand years ago the urge to tell a story represented far more than a desire for individual gain.  Newly discovered images of the earliest example of storytelling featured “therianthropes” – characters that embody a mix of human and animal characteristics. Our storytelling instincts were far less about individual profit and much more about collective wellbeing.  We risk a failure of the spirit when we forget this. (as well as a failure to address climate change and other global problems)

I first encountered ancient therianthropes in Museo del Oro in Bogata where solid gold characters blended the characteristics of humans and animal spirits. And more recently, when a friend who has a bad habit of suppressing his creative spirit to please others showed me a small brass tiger he carried in his pocket to remind him to act with courage. What animal spirit would improve the spiritual message in your storytelling?

I had taken an early morning flight from Sydney to Melbourne and while I don’t really like orange juice I was... END_OF_DOCUMENT_TOKEN_TO_BE_REPLACED

New Hampshire is cold in March. I was happy to be heading home to North Carolina. The shuttle driver was... END_OF_DOCUMENT_TOKEN_TO_BE_REPLACED

I’d love to hear what you think about this podcast. I share a story of an early experience of sexual harassment and the... END_OF_DOCUMENT_TOKEN_TO_BE_REPLACED

“I think it’s because the dominant story in our culture is one that creates a feeling of powerlessness, and it... END_OF_DOCUMENT_TOKEN_TO_BE_REPLACED

Sometimes I hear a story that I just have to share.  This one came from my mother, Harriet. In this... END_OF_DOCUMENT_TOKEN_TO_BE_REPLACED