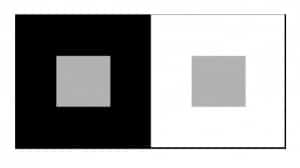 Same gray, different frames. Objective thinking is not as objective as we might think.

The optical illusion above demonstrates how a black or white background will cause two identical gray squares to seem different. The gray square against a black background usually seems lighter.

Living a more meaningful life may simply be a matter of feeling connected to a bigger circle of moral concern and finding the sweet spot between self-interest and collective interests. Sacrifice is the flip side to the joy of belonging. James Baldwin quoted Shakespeare: “Out of this nettle danger, we pluck this flower, safety,” as a definition of art and poetry. Everything that matters to us matters more when we stand in the sweet spot of contrast. We better feel the pulse of our hearts when we win the struggle against our demons. Jack London, in Call of the Wild, asserts that “such is the paradox of living, this ecstasy comes when one is most alive, and it comes as a complete forgetfulness that one is alive.” There can be no Call of the Wild without a deep understanding of the un-wild and taming effect of civilization. Stories that are too civilized need a bit of wild to feel real, and vice versa. Storytelling turns into dark magic when a story is distorted to portray a human paradox as if there was one viable solution rather than balancing two poles of a paradox we must manage. If all our heroes win, we never learn to value failure.

Retaining paradox keeps your content relatable, realistic and alive with contrast. We can use whatever template we like as long as our stories retain a tension between the trade offs of reason and emotion, safety and freedom, efficiency and resilience, logic and compassion and all of the other messy truths vital to a meaningful life. Stories that track the drama of finding these sweet spots are simply more interesting.

And now it seems like paradox might even be a natural law we didn’t fully understand until after we used highly sophisticated computers to hack efficiency. Neurological research by Israeli professor Rony Paz of the Weitzman Institute and Professor Itzak Fried suggest there may be a “zero sum game between efficiency and robustness.” 1 We gain one at the price of the other, and vice versa. In the brain, cognitive rational signals can become so efficient they marginalize the amygdala’s primitive signals and the imbalance causes dysfunction and a lack of resilience. The professors suggest the metaphor of a washing machine run by highly efficient software that lo-and-behold increases the likelihood of the washing machine breaking down. Paz compares the amygdala to the washing machine drum: “It’s not highly sophisticated, but it is less likely to fail – which is important to animals’ survival.”

Trying to outsmart the “efficiency vs. nature” paradox in finding and telling stories creates the same results. Efficiency is only one pole of this human paradox. And it’s opposite is not chaos, but nature’s efficient system for survival – moral emotions generated by an “unsophisticated” but robust amygdala. The amygdala system has been denigrated as our “monkey mind” for decades, but monkey minds know stuff. Our emotions may be “irrational,” but they are irrational for survival-based reasons that use emotions to guide the survival behaviors we call morals.

Emotions keep us alive and connected. I imagine a data analyst and Hopi chief would have vastly different ideas about what is “efficient,” one smart, the other wise. With storytelling, if we rely too much on efficient templates, lo-and-behold it increases the likelihood of stories that break down. If storytelling evolved as nature’s method for curating emotional lessons for survival (more on that in the next chapter) then forcing stories to adapt to technology’s version of “efficiency” may marginalize the emotions we need to facilitate workable survival habits.

Living a good life, doing a good job, being a good leader, and telling a good story blend art and science. Laws, dogma, and their digital-grandchildren, algorithms, will never permanently resolve the paradoxes of being human. It would be like forcing a person to choose one solution between a) Breathe in oxygen or b) Breathe out carbon dioxide. Retaining paradox invites listeners to trust their senses and mine the wisdom of their own experiences with stories that offer context rather than dictate.

Warning: Use of undefined constant PWP_NAME - assumed 'PWP_NAME' (this will throw an Error in a future version of PHP) in /home/annett18/public_html/wp-content/mu-plugins/mu-plugin.php on line 111

I’ve been trying to infiltrate the halls of power for decades. My secret mission is to increase the diversity of thought by teaching those without a voice how to tell their stories and by teaching leaders how to find and retell stories that broaden everyone’s understanding. END_OF_DOCUMENT_TOKEN_TO_BE_REPLACED

Truth in Storytelling When I wrote the first edition of The Story Factor twenty years ago, I began with the... END_OF_DOCUMENT_TOKEN_TO_BE_REPLACED

The Moral Dilemmas of a Lion, a Scarecrow, and a Tin Man Frank Baum’s original introduction to The Wizard of... END_OF_DOCUMENT_TOKEN_TO_BE_REPLACED

Blueprints for Building Trust Learning to drive was fun until I hit the mailbox. I burst into tears, blaming... END_OF_DOCUMENT_TOKEN_TO_BE_REPLACED