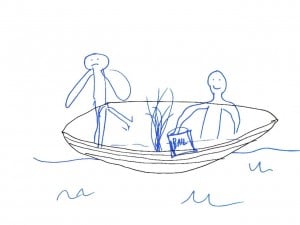 The guy on the right drew this map.  He is bailing out the boat that is sinking.  He is doing his job in spite of a bad situation.  I asked, “Who is the guy on the left?”  He said “That’s my boss.”  A few heads turned toward his boss sitting up front.  I asked “So what is he doing?” He answered, “He’s pissing in the boat and not doing much else.”  There were guffaws from his cronies and the rest of us couldn’t resist smiling. It’s funny.  The manager just shook his head probably thinking “is it that bad?”  Then one of his buddies asked, “So why are you smiling then?”  He whipped his head around and was shocked to see the smile.  This was a union management meeting and so far nothing had gone well.  In that split moment, he saw himself and maybe the others did too.  I mentioned it much later: “Is it possible that the fight, leading the cause, being the union representative is fun for you?  Would you have as good a time if we solved all these problems?”  When the thirty people present got the opportunity to speak for themselves it turned about 27 of them liked their jobs and just wanted to get back to doing their jobs.  Only the three union reps were angry and unhappy.  Often groups that seem to be at an impasse are simply being held hostage by a few malcontents.

Truth in Storytelling When I wrote the first edition of The Story Factor twenty years ago, I began with the... END_OF_DOCUMENT_TOKEN_TO_BE_REPLACED

The Moral Dilemmas of a Lion, a Scarecrow, and a Tin Man Frank Baum’s original introduction to The Wizard of... END_OF_DOCUMENT_TOKEN_TO_BE_REPLACED

Blueprints for Building Trust Learning to drive was fun until I hit the mailbox. I burst into tears, blaming... END_OF_DOCUMENT_TOKEN_TO_BE_REPLACED

Brand Stories: Trust Based on Trustworthy Behaviors Nike has employed corporate storytellers since the 1990s. Their decision to illustrate... END_OF_DOCUMENT_TOKEN_TO_BE_REPLACED