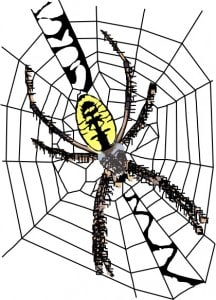 “Come on in” said the spider to the fly.

“He would use the bureaucracy. He would tie things up in bureaucracy. He knew how to make moves and grab what he wanted and then tie it up so you couldn’t get it back.  He would use the system…He would mislead people into thinking that he was being cooperative while he was doing this other stuff behind the scenes. He always put on the face of a very cooperative person, but he was a back stabber.”

The Invisible Walls Game is a broad catch-all bucket of highly creative yet secret (well…deniable) ways to stop the progress of an idea while pretending to support that idea in public.  One subject reported that a game player agreed to share information and then buried the needed information within a mountain of data and printouts.

“[They] completely disallowed any useful information to come out for me to take back and use as a program. The people in that meeting , therefore, accomplished not allowing  the program to be started.”

Of course, not all walls are inherently bad.  Good fences make good neighbors.  A “wall” is not a game until a group decides they no longer need/want to be a good neighbor.

One Big T Truth about being human is that, to survive, we must balance the paradoxical benefits of connections and protections.  Too much emphasis on protection erodes connections. Too few connections and we cannot solve problems that require collaborative effort.  Every decision to protect has the potential to erode a connection and vice versa.

Twenty years later, the word “bureaucracy” in the quote above can also describe new technology-run administration systems (new forms of bureaucracy) with built in walls that prevent unauthorized acts of connection/generosity before they can happen. For instance in healthcare, systems increasingly redefine face-to-face interactions as unnecessary and thus avoidable expenses. Kiosk check ins, website based communication and automated telephone systems effectively wall off any chance the providers I need will have to waste time on a healing smile, a shared  joke, or an expression of empathetic connection.   Some territorial game players are even proud of how these walls keep resources out of the reach of anyone outside their circle of moral concern.

Everyone knows that some walls are good, even vital, but the territorial game of Invisible Walls (not so invisible lately) specifically describes behaviors of a core group that hoards resources needed for collective actions. If it’s not a game (legit protection) it isn’t an invisible wall.

In the 3rded. of The Story Factor (Fall 2019) there will be more about how individuals, groups and institutions use stories to define who is and is not within their “circle of moral concern.”  Shrinking circles mean fewer connections.  And when the desire to protect causes us to neglect the care and feeding of vital connections required to solve problems too big for our tribe alone– we are playing games with our future.

Truth in Storytelling When I wrote the first edition of The Story Factor twenty years ago, I began with the... END_OF_DOCUMENT_TOKEN_TO_BE_REPLACED

The Moral Dilemmas of a Lion, a Scarecrow, and a Tin Man Frank Baum’s original introduction to The Wizard of... END_OF_DOCUMENT_TOKEN_TO_BE_REPLACED

Blueprints for Building Trust Learning to drive was fun until I hit the mailbox. I burst into tears, blaming... END_OF_DOCUMENT_TOKEN_TO_BE_REPLACED

Brand Stories: Trust Based on Trustworthy Behaviors Nike has employed corporate storytellers since the 1990s. Their decision to illustrate... END_OF_DOCUMENT_TOKEN_TO_BE_REPLACED