You are here: Home / Uncategorized / Advice from an 80 yr. old shuttle driver… 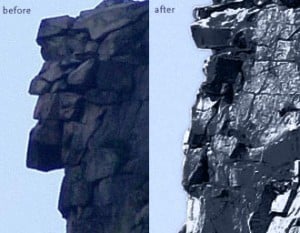 Old Man in the Mountain: Before and After

New Hampshire is cold in March. I was happy to be heading home to North Carolina. The shuttle driver was napping behind the wheel. The sunshine warmed him through windshield. When I opened the passenger door he stirred,

“Thanks for waking me up!” He pointed. “Open that sliding door – that’s it, behind you – and put your bag anywhere you can find.”  The door was heavy. I used both hands to slide it back.  I hefted my bag high enough to fit on the seat above. Placed my backpack in front of it on the floor of the van and slid the door shut.

“Nah, you didn’t get it. Open it up and try again. You got to really slam it shut.”

I opened the heavy door, pulled it three feet back, then a little more. I took a running start and slammed the door into the lock mechanism.

“There you go, now get in here where it is warm. So how did you like New Hampshire? Did you get to spread your wings?”

“I got to go downtown last…”

“You need to spread your wings.  When you come back….what do you like: the mountains or the ocean? Of course the beach is the same anywhere. Did you know we have a mountain 6000 feet tall? We do. I used to be a truck driver and driving out … there was this old man – a rock formation, his nose, you could see his ears. Forty three years I’d look out the window and say “hello old man” then when I was driving back, “Hello old man.  Until he fell.”

My new friend points his finger high up and then whistles it down as he imagines the ancient rock formation from his memory crashing down to the bottom of the canyon. He seemed to stare at the rubble for a split second, then he mimics looking out the window again. “Forty three years I been saying hello to the old man. He’s not there anymore.”

“You got to spread your wings. Next time you are here you need to take a taxi, they won’t charge you that much. Go see something.  You can drive out toward Concord, just fields and farms. Serene. There’s God in that quiet. Cows don’t talk. Thank goodness. I guess. I’m a Catholic. I love my family. I’m one of seven. My mother was one of eighteen. They are all gone now. Now it’s just us. And we’ll be gone soon.

“So I’m putting away the material things and getting ready for the spiritual. I’m eighty. People say I don’t look a day over 65. (I thought he looked eighty.) I never drank. I don’t drink. Never smoked. I have diabetes but the doctor says I’m doing fine.

“You got to spread your wings. I loved all of my jobs. This one? This van is a toy I get to drive around all over everywhere every day. I get to meet people. I believe in dialogue. I flew down to Florida. I don’t like it there. They don’t understand hospitality. I don’t have a phone. I’m old school. I got on the plane and said, “Hello!” and the guy next to me he’s got his thumbs tapping and he doesn’t even look up. I say, “You can’t even say hello?” He doesn’t say a thing. I sat next to him the whole way and we don’t say nothing. That’s a shame. People don’t talk.

“I think this virus… it’s going to remind us that we need to value each other. We need to treat each other better. I think we are going to come together. We are like beads on a rosary, all linked together.”

“I was born on a farm up in Vermont. We had the farm table that sits fifteen. I was three and my mother says to us all after dinner, get on your knees and let’s say the rosary. I’m three. I tell her ‘I don’t know the rosary.’ She says ‘You will when I get through with you.’ I learn it in English. Then I learn it in French.

“Down at the bottom of that mountain is a lake they call Mirror Lake, because it is. You can look down into it and see the mountain. You got to spread your wings. It is silence that brings you back to peace. You can feel it. You know what I mean.”

He never let me say a word. And it was my own silence that let this old man’s imagery and poetry bring me some peace. Airplanes, hotels and conference halls cramp me up, particularly now that we have to be so careful. But this old man took me to the beach, drove me past the cornfields and showed me the mountain reflected in Mirror Lake. I got to spread my wings just listening.

Yes, I had to lug my own bags but that’s okay. I imagine him now back at the hotel finishing his nap in the sunshine his wings fluffed and relaxed.

Truth in Storytelling When I wrote the first edition of The Story Factor twenty years ago, I began with the... END_OF_DOCUMENT_TOKEN_TO_BE_REPLACED

The Moral Dilemmas of a Lion, a Scarecrow, and a Tin Man Frank Baum’s original introduction to The Wizard of... END_OF_DOCUMENT_TOKEN_TO_BE_REPLACED

Blueprints for Building Trust Learning to drive was fun until I hit the mailbox. I burst into tears, blaming... END_OF_DOCUMENT_TOKEN_TO_BE_REPLACED

Brand Stories: Trust Based on Trustworthy Behaviors Nike has employed corporate storytellers since the 1990s. Their decision to illustrate... END_OF_DOCUMENT_TOKEN_TO_BE_REPLACED