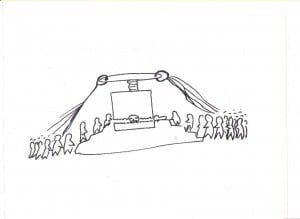 “That’s me getting screwed, but really …we take turns because when I feel screwed I end up passing it on.”

For want of a better term, let’s refer to those you feel obligated to protect as being inside your circle of moral concern. No one can tell you how big this circle should be. And no one can monitor your circle of moral concern, except you. You may have never considered how big this circle is, but you have one. We all do. Some storytellers only seek to benefit the people they are paid to serve. When political stories demonize either “the left” or “the right” they reduce our ability to imagine and create mutual wins. Commercial storytellers tend to limit their circle to commercially relevant targets. These storytellers have a small circle of moral concern and are more likely to risk coercive storytelling that benefits their tribe, even when (or especially if) it might sacrifice the best interests of people outside their circle of concern.

By contrast, many literary storytellers seem to embrace all of us in their circles of moral concern. Mark Twain’s Huckleberry Finn offers legitimate reasons for helping a friend when it means breaking an unjust law. Tolstoy’s story of Anna Karenina warns readers that a preoccupation over what is or is not fair might distract us from finding good practical ways to cope with unavoidably unfair situations. A storyteller with a very large circle of moral concern cannot ignore ambiguity and must constantly guess the impact the strategies in their stories might have on the wellbeing of strangers. The trade off is that a storyteller with a big circle of moral concern is more likely to see and narrate epic truths.

Storytelling, at its best, is a collaborative form of communication that accumulates wisdom and habits for social good as well as individual good. As Ursula Le Guin observed, “There are entire societies that have never used the wheel. But there are no societies that did not tell stories.”

Truth in Storytelling When I wrote the first edition of The Story Factor twenty years ago, I began with the... END_OF_DOCUMENT_TOKEN_TO_BE_REPLACED

The Moral Dilemmas of a Lion, a Scarecrow, and a Tin Man Frank Baum’s original introduction to The Wizard of... END_OF_DOCUMENT_TOKEN_TO_BE_REPLACED

Blueprints for Building Trust Learning to drive was fun until I hit the mailbox. I burst into tears, blaming... END_OF_DOCUMENT_TOKEN_TO_BE_REPLACED

Brand Stories: Trust Based on Trustworthy Behaviors Nike has employed corporate storytellers since the 1990s. Their decision to illustrate... END_OF_DOCUMENT_TOKEN_TO_BE_REPLACED