You are here: Home / Uncategorized / Stories with a Moral Blueprint – Part 1 of 8

The Morals of Our Stories 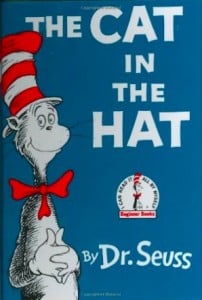 Dr. Seuss’s story The Cat in the Hat embodies a lesson for any of us who loved this book as a child. In the book, two children alone at home are tempted into mischief by a cat wearing a top hat while their pet goldfish warns them of dire consequences. While the cat persuades the children to ignore the goldfish and join in his messy fun, afterward he orchestrates a massive cleanup just in time to avoid parental consequences. To me the story implied that I could have fun, break the rules, and do whatever I wanted as long as I cleaned everything up before my parents found out. Others favored the goldfish’s advice to follow rules and avoid making a mess in the first place. With the help of stories like this one, children learn how to balance fun and responsibility in ways that are vital to their success as adults and their success as storytellers.

Seuss’s plot offers a blueprint that traces both the fun and cost of making messes while simultaneously making it clear that leaving your messes for others to clean up doesn’t work over the long term. Learning to clean up the messes we make is a moral lesson that starts with children’s stories and passes from each generation to the next…if, and only if, we protect and repeat the behaviors recommended in stories to sustain society’s faith that our collective survival depends on certain prosocial habits.

If we reclaim the term “moral” from negative connotations of judgmental intent and hypocrisy, it is much easier to embrace the idea that moral lessons work to our advantage. The emotional qualities of our lives, products, services, and families directly reflect the quality of the moral lessons we reinforce by repeating certain stories. Now that most of our conversations about what is morally good or bad occur within the context of technology, it requires more of a concerted effort to remember that emotional reasoning already influenced the design of any system programmed by humans.

From a purely rational, profit-maximizing context, spending money on moral behaviors such as conserving resources, building products that last, or refusing to exploit human weaknesses seems like someone else’s problem rather than an investment in  proving you take our collective future seriously. Once labeled inefficient, unnecessary or avoidable, the prosocial emotions that previously encouraged us to override certain selfish interests weaken. When moral behaviors like self-restraint, empathy, and compassion stop feeling meaningful, we become less collaborative and more isolated. Without stories that train our imaginations to have faith that today’s sacrifice of time and energy will pay off, we are at risk of losing the irrational but highly functional faith that moral actions pay off, even though it is impossible to calculate how and for whom, exactly.

Moral behaviors that can’t be justified with ROI calculations will fade unless we keep telling the kinds of stories that bolster our faith that the intangible benefits of certain moral actions transcend short term financial returns. Without a concerted effort to sustain our faith in morally reasoned stories, we expose ourselves to the danger of the weaponized stories and fake news designed specifically to poison cultural reservoirs of meaning and trust. For instance, many stories of disruption suggest it is smart to increase profit by identifying and eliminating expenses that protect intangible collective benefits and pay only for actions that directly contribute to profit. The truth is that there is no business case for moral norms that can’t be undermined by a motivated data analyst. In a world that only recognizes calculable cost-benefit ratios, moral norms lose meaning and stop driving behavior. So we must sustain these meaningful stories if we want to live in a moral and just world.

Truth in Storytelling When I wrote the first edition of The Story Factor twenty years ago, I began with the... END_OF_DOCUMENT_TOKEN_TO_BE_REPLACED

The Moral Dilemmas of a Lion, a Scarecrow, and a Tin Man Frank Baum’s original introduction to The Wizard of... END_OF_DOCUMENT_TOKEN_TO_BE_REPLACED

Blueprints for Building Trust Learning to drive was fun until I hit the mailbox. I burst into tears, blaming... END_OF_DOCUMENT_TOKEN_TO_BE_REPLACED

Brand Stories: Trust Based on Trustworthy Behaviors Nike has employed corporate storytellers since the 1990s. Their decision to illustrate... END_OF_DOCUMENT_TOKEN_TO_BE_REPLACED