Charlottesville Vigil in A Southern Town 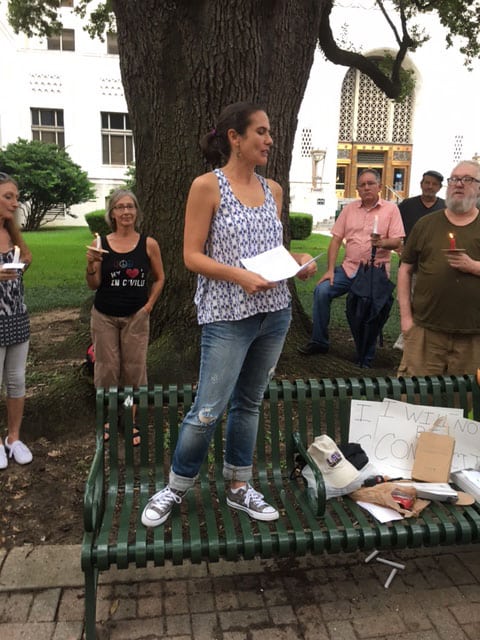 Elizabeth Beauvais spoke the words written below last Sunday night at a local vigil to mourn the violence in Charlottesville. We still have a confederate monument directly in front of our court house. Let’s not ignore the stories perpetuated by these monuments. Monuments have motives. This one was erected during Jim Crow when loyalty to Confederacy was code for white supremacy.  It still is.

She agreed to let me share a copy of her words:

“I went to the University of Virginia in the mid-1990s as a Jefferson Scholar, a scholarship that brought with it expectations of not just academic excellence, but citizenship and a real contribution to the inclusiveness, equality among student life. I soon learned that this was a campus-wide religion at UVA – this religion to Jefferson and his democratized ideals of self-determination, honor and equality. I took the history of civil rights under Julian Bond and poetry with our first black female poet laureate Rita Dove. I say this to tell you what a horror and shock it was to see hundreds of torch-bearing neo Nazis walking the central lawn of this campus, my campus, on Friday night. Don’t get me wrong – Charlottesville, then and now, struggles with a racist and misogynist past with lingering aftershocks in the present– a state school that didn’t allow women in until 1970, a university built with slave labor under the design of a founding father whose repeated rape of his slave mistress has become perversely romanticized. Charlottesville is far from perfect. But Charlottesville did not bring this on itself.

I believe that Charlottesville was expressly targeted as a strategic battle site by douchebag Richard Spencer and his NeoNazi, racist colleagues BOTH because it is now a progressive city built by the leading architect of America AND because it could actually be anywhere. For outside hate groups to invade and unilaterally terrorize a city that voted over 80% blue in the last election, a college town, and UNESCO world heritage site – (a city also, by the way, surrounded by a sea of red) – is a pointed, clear message that reads: We can take Berkeley with torches and hate just as easily as we can take Shreveport.

This matters to us not just because we feel for people in Charlottesville but because the violence could happen here — and the oppression and marginalization of already vulnerable people is in fact happening daily at the policy level.

My friend Kristin Adolfson was in the crowd hit by the car Saturday that barreled into her and dozens of other peaceful protesters that were holding signs that said, “Solidarity. Unity.” Kristen had written Love Not Hate on her shoulders and carried snacks and water in her backpack. She was marching by a low-income housing complex that white supremacists had been tormenting with racial epithets and chants of “Heil, Trump”. Miraculously, Kristin was unharmed, but a woman near her, Heather Heyer, died. Kristin told the New Yorker in an interview Sunday: “This was a terrorist act. Something that happens in so many places around the world, and it happened here in our little town. And I still can’t process the hate—that someone could actively take people’s lives, that’s what their goal was.”

“What I can’t forget: The joy we had as we were marching down Water Street. Clapping and chanting and the solidarity and the community.

Then: such a strong feeling of ***NO!!!!!*** when I realized what was happening, realizing there was a car at full speed plowing through us. If my NO could have stopped time. It felt like it should have, it was that big.
How I knew what was happening and I couldn’t stop it. The sound of the car hitting human flesh and bone, ripping into us like dominoes, a quick staccato. Bodies thrown into the air. The anger that someone would do this. So angry, so angry. NO.
NO to the car and to the driver and to why it happened.
The fear for how bad it was, how many dead? How many dead.
A woman supported by three friends screaming heart wrenching. Her scream contained all our screams.
The tear streaked face of the young man wearing gray and a black medical mask around his neck, telling me someone is dead.
His face. Grief, incomprehension, pain, tears and pain, collapsing not able to stand.
His face.”

Over the past several years, since Sandy Hook, I’ve wondered – how long until I know someone who’s killed by gun violence and unchecked hate and intolerance? Or since Lafayette – when will I need to map out the exit the next time I take my kids to see a movie? How long until it comes for me or someone central to my life? I didn’t have the opportunity and the misfortune to test my courage as Kristin did (and I know that for many the awfulness of racially motivated violence has long been in their streets.) Charlottesville is as close as it’s come for me. I won’t let my fingers write “so far” – but that of course is my fear, your fear, all our fears, right?

Here’s what I know:

I need to say how much of an imposter I feel as a well-meaning, slightly crunchy aging liberal white woman talking about bigotry and racism. I am acutely aware of the fact that what I am speaking of is no news at all to my neighbors of color in Shreveport. In fact, I told Tamica there were people far better positioned than me to speak today. But then, I remembered what I read this Sunday morning in the New York Times:

“Now is the time for every decent white American to prove he or she loves this country by actively speaking out against the scourge this bigot-ocracy represents. If such heinous behavior is met by white silence, it will only cement the perception that as long as most white folk are not immediately at risk, then all is relatively well. Yet nothing could be further from the truth, and nothing could more clearly declare the moral bankruptcy of our country.”

Annette Simmons has travelled internationally while working with government, business, religious, and educational organizations. Her ability to deliver practical, easily implemented solutions when groups were antagonistic or deadlocked has gained her an international reputation in group dynamics.
PrevPreviousBudweiser Storytelling Genius Used for Good
NextWho Controls the Truth?Next

1 thought on “Charlottesville Vigil in A Southern Town”